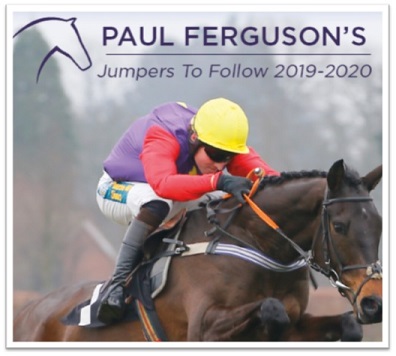 You know the National Hunt game is about to get deadly serious when Paul Ferguson’s annual guest post appears on NTF!

I’ve a bit of a mental checklist that I tick off during September as I prepare my brain for the National Hunt season that is rapidly approaching, generally starting with the Kerry National analysis and then swiftly followed up by the Paul Ferguson guest post.

Those two alone signify that I should be thinking about putting the finishing touches to my ‘Alternative 20 to follow free guide‘ and ‘well handicapped NH horses post‘ (both well under construction by the way, you won’t have to wait too long for them!).

As is always the case at this time of the year I’m currently working away behind the scenes on a number of free guides and must read blog posts for NTF readers (that’s you!) and I’ll be drip feeding them to you over the next few weeks. Building you all up to a climax before unleashing you upon the wonderful winter game we call jumps racing!

For now though I’ll leave you in the extremely capable hands of Mr Paul Ferguson, who once again has out done himself with the quality of his guest post.

Paul, who is currently deep in promo territory for his excellent and must have National Hunt publication ‘Jumpers To Follow 2019/20‘, has taken a slightly different slant for this year’s blog post and delved into the Northern territories and the Point-to-Point fields and provided us with an exclusive ‘Ten to Follow’ list for the season ahead.

Take it away Paul…

He might be eight, but Breizh Alko is lightly-raced for his age and he promises to make his mark in novice handicap company this season.  A winner at the second time of asking for the Rebecca Menzies stable, the son of Balko appreciated the step up in trip and softer ground when successful at Haydock in March, after which the ground turned against him and prevented him from attempting to follow up.  Upped 6lbs for his Haydock win, Breizh Alko – who had been off the track for three years before making his debut for Menzies – begins the season on a mark of 111, from which he will certainly be of interest in a novices’ handicap chase.

Runner-up on his racecourse debut at Haydock, Ebony Jewel was then purchased out of the Ronald O’Leary yard and made a winning debut for his current connections in a soft-ground bumper at Ayr.  His Haydock conqueror had already advertised the form by this point and he ran out an impressive 12-length winner, under Lucy Alexander.  Upped in class, the Westerner five-year-old made his final start of the campaign in the Grade 2 at Aintree, where he ran better than the bare result would suggest.  Keen throughout the early part of the race, he probably did well to keep going for as long as he did and only gave best late on.

When he returns, Ebony Jewel looks capable of making his mark in northern novice hurdles, particularly if learning to relax with racing.  He is clearly at home on soft ground, which will help throughout the mid-winter, and his exuberant way of going will ensure that he can make his own running in small fields when necessary.

Former Scottish Champion Hurdle winner Midnight Shadow would have been the obvious horse to include from the Sue Smith stable, as he could easily make a big splash in the novice chase division this season.  However, Rare Clouds shaped with considerable promise on his racecourse debut at Wetherby in early-January and he is certainly bred to make his mark once sent jumping.  A full-brother to Vintage Clouds and a half-brother to Vintage Star, the five-year-old travelled well for a long way, before fading into sixth.  He ought to relish going up in distance once sent hurdling, although I’m told that there is chance that he could reappear in a bumper – hopefully, it will be on a stiff track such as Carlisle, if that is the case.

Probably the pick of the bumper horses in the North last season, Ribble Valley won twice at Ayr and rates a really smart prospect for novice hurdles over the minimum trip.  Clearly blessed with plenty of speed, he still looked rather immature when inconvenienced by a lack of pace at Cheltenham last November, and the fact that he skipped the spring festivals could prove to be a shrewd move in time.  The son of Westerner looks sure to win races over hurdles and if all goes to plan, he could well be one for Aintree come next April.

Dual-purpose trainer Keith Dalgleish saddled six winners in bumpers last season, with three-time winner Alright Sunshine the pick.  He has since flourished on the Flat, so it seems unlikely that we will see him over hurdles any time soon, but he has another really nice prospect on his hands, in the shape of Sidi Ismael, who actually finished third behind Ebony Jewel before winning at Hexham.  It took him three starts to get his head in front in the bumper sphere, having earlier finished runner-up to Bold Conduct (now with Colin Tizzard) in an Irish Point.  A five-year-old by Great Pretender, he is another to note in the novice hurdle division and is another who could appreciate going up in trip.

A Flemensfirth four-year-old, Blossoming Forth might have only beaten two opponents when successful on debut for Philip Rowley, but she travelled supremely well and looked another potentially smart recruit to the Ruth Jefferson stable.  A full-sister to Beg To Differ (winner of four races for Jonjo O’Neill), she jumped well and is bred to appreciate a trip in time, but she didn’t look devoid of pace, so could easily be quick enough to start off in a bumper.  It is worth remembering that Jefferson did well with a similar type (on paper at least) in Mega Yeats last season, and it will be interesting to see if she plots a similar route.

Not only did Ferny Hollow provide trainer Colin Bowe with a 300th Point-to-Point success at Knockanard in February, but he also marked himself down as an extremely exciting prospect, so I wasn’t at all surprised when Harold Kirk went to £300,000 to secure him just four days later.  A four-year-old by Westerner, he scored by 15 lengths, looking in a different league to the opposition, and he will sport the silks of Cheveley Park Stud when he reappears.  I would be shocked if he didn’t form part of Willie Mullins’ bumper team this season and should he go and win well on debut, he could even be one for the Graded bumpers in the spring.

Olly Murphy has an abundance of young talent at his disposal and his fledgling training career should continue to flourish during the upcoming season.  He has several exciting recruits from the Irish Point-to-Point ranks, one being Gunsight Ridge – a four-year-old by Midnight Legend – who showed plenty of pace when winning at Loughrea for Donnchadh Doyle.  Bought privately, he will sport the silks of Mrs Diana Whateley, owner of Thomas Darby, who is set to form part of a strong-looking novice chase team at Warren Chase.

Another from the Donnchadh Doyle academy, Lets Go Champ created a really big impression when winning at Bartlemy in May, after which he changed hands for £375,000.  The most impressive part of the performance was the ease with which he made up ground on the leaders down the far side and having visited Tom George’s yard over the summer, I can see just why he cost his new owner (Roger Brookhouse) so much.  A gorgeous individual, the Jeremy four-year-old looks to possess the size and scope to go with his engine, and it will be disappointing if he can’t make a big impact under Rules.

Another expensive purchase (£440,000) following a four-length success at Liscarroll for Colin Bowe, Papa Tango Charly is now in training with Jonjo O’Neill and will represent new yard sponsor, Martin Tedham.  Despite not being fluent at either of the final two fences, he ran out a taking winner and the placed horses also fetched big money at the sales, with the third also going to Jackdaws Castle, whilst runner-up Big Bresil is another who is in training with Tom George, for Roger Brookhouse.  A chestnut by an improving young sire who I like, No Risk At All, the four-year-old left the distinct impression that he would relish a more galloping track, such as Chepstow or Newbury, and he looks an exciting recruit to a stable who has been in really good form through September.

Many thanks to Paul as always for taking the time to provide a very interesting ten to follow.

Again I would like to give Paul a huge thanks for his time and expertise and I for one thoroughly recommend his excellent Jumpers To Follow publication, it’s simply a must have for any and ALL National Hunt fans.

P.S. I know a lot of you take the summer off, steering clear of the flat game, but feet-up time is over people, it’s time to get yourself back in the game! Wake yourselves up, dust yourselves down and give yourself a crack about the chops!! Whatever it takes to get back in the land of the living!! It’s National Hunt time!!!

I’ll be adding my usual thoughts and pointers between now and the start of the season, as well as a few new shiny angles, via various articles, analysis and free NTF guides, including…

What we learned from the weekend

And much, much more…

4 responses to “Paul Ferguson’s Jumpers To Follow: Pointing to the North…”