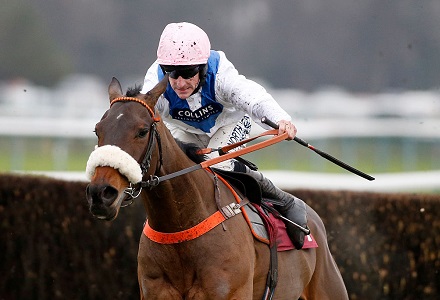 He was worth the wait…

The first ‘real’ week after the New Year is often a bit of a slow and painful grind, a bit of a lackluster churn-fest, as people head back into the real world, back to work, back to school…zzzzzzzzzz

To be fair the racing is a bit patchy at the minute as well, it’s still taking a bit of a battering from the weather and it’s just eased off a little in the way of class, except for the exceptional Waiting Patiently at Kempton on Saturday! Wow!, but there is always something for us to get stuck into, something for us to take from the action, and here’s my take on what’s just entered the form book in the latest installment of ‘What we learned from the weekend‘…

1. Nicky Henderson has his string absolutely red-hot at the minute…

Check out Hendo’s figures from the weekend…

…and all that whilst he was up in Scotland getting married!?!

Quite a weekend for Hendo, no doubt about that!

There were a couple of notable victories in amongst those stats, with the Lanzarote Hurdle victory of WILLIAM HENRY and the Leamington Spa Hurdle victory of MR WHIPPED both high class performances, but for me it was the victory of his young French recruit TERREFORT at Huntingdon on Friday that most caught the eye.

The 5yo jumped for fun on the front end in the 2m4f Novice Handicap Chase and quite simply made a mockery of his opening handicap mark of OR 137, winning by an exceptionally comfortable 10L+ from the rest of the field.

He’s clearly very smart when gunned from the front so having Darryl Jacob on top is going to be a major bonus (he’s the owners retained jockey) and he’s very much a youngster to keep on the radar. It’s also worth noting that although this was his first start over here he has had 6 chase and 4 hurdle starts in France and has plenty experience under his belt for a 5yo chaser.

The handicapper will have his say after this effortless victory (*he’s been pumped 14lbs to OR 151) and I suspect their hand will be forced and he’ll be up into graded company next, races like the Altcar (Haydock) & Reynoldstown (Ascot) have already been mentioned for him as likely next ports of call, but on this evidence he’ll be up to those challenges.

He was held-up in his races when in France but hopefully they stick to the forcing tactics applied at Huntingdon as his clean jumping and smooth travelling style is likely to put plenty of his opponents under pressure.

Keep Terrefort firmly on your radar…

Simple as that for Patrick Mullins, who is, of course, the son of Willie Mullins.

He probably got the greatest thrill this weekend from riding GETABIRD to success in the Grade 2 Moscow Flyer Novices’ Hurdle but it was his two other victories, both in bumpers, that interest me the most.

Now I’m sure you don’t need me to be telling you that Mullins Jnr rides a serious amount of bumper winners, but what you maybe are not aware of are the exact figures he’s produced since 2013, especially when riding his fathers horses in bumpers.

Take a look at these outstanding stats…

It may only be 4% above expectation but jeezo that 41% strike-rate is something to behold! Even more so the fact you can still rake in a tidy little profit by backing them all blind.

Which gives figures of…

That mini-angle is already 3 from 3 this year, including the two from the weekend, and although it won’t make you rich it will keep your bottom line ticking over sweetly.

3. There’s a star in the north and the patient wait was well worth it…

If there was one real standout performance over the weekend it was quite clearly WAITING PATIENTLY, who absolutely romped away with the Listed 32Red Casino Chase at Kempton on Saturday, taking his chasing record to 5 from 5 in the process.

There is just so much to like about this horse. He jumps extremely quick and economical, travels smoothly and has a change of gear when it’s needed. It’s hard to pick holes in him at the minute and he’s well worth stepping on again to take on the big guns.

Yes I suppose there can be excuses made for his opponents on Saturday (Art Mauresque – Ground | God’s Own – a primer for the spring | Smad Place – far from as consistent as he was | Josses Hill – Who knows what’s up with him! | Ballybolley – probably outclassed) but the manner in which he dismissed them was nothing short of sensational and the hard facts are that he’s posting better figures each and every time he runs.

…a further sign that we are dealing with a serious horse here.

He’s such a smooth traveler that there must be a temptation to go back to 2 miles, indeed the Queen Mother Champion Chase is very much under consideration, but hopefully they keep him at the mid-range trips from here on in as he looks like a potent force over these 2m4f/5f trips.

Further down the line I actually hope connections have Gold Cup ambitions in mind as he very much looks to have the talent to be considered for a tilt at racing’s Blue Riband event. He looks to hold enough stamina in his pedigree – by Flemensfirth out of a Beneficial mare, similar to One Track Mind from the Warren Greatrex yard who won a G1 at 3 miles over hurdles – and his smooth travelling and clean, economical jumping will be a massive advantage in the heat of the Gold Cup battle.

If there is a concern for his spring ambitions it may well be the ground, the signs are that cut underfoot looks necessary, but as it stands that’s an assumption rather than fact and in any case there’s every chance of Good to Soft ground appearing come seasons end, especially with the way our weather systems are playing up!!

Wherever he ends up he looks a serious top of the tree player but personally I’m hoping for a bit of Ryanair Chase action this year followed by a blast at the Cheltenham Gold Cup in 2019! It’s about time there was a serious Gold Cup player coming from the north again…

Is Patiently a Gold Cup player in Waiting?

p.s. I’ll be looking to get some FREE Cheltenham Festival guides out in the coming weeks so make sure you are on the free NTF mailing list by going HERE