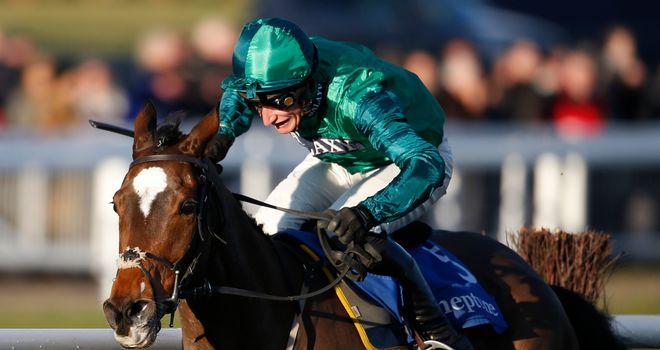 Cheltenham is his domain…

I know, I know. It’s been a while. Once again the family visiting duties consumed me in the early part of the year and as much as Mrs NTF and I try and fight it we do have to make an appearance every now and then with the extended family! Usually I manage to sneak away and watch the racing when we are doing the rounds, but for some reason things just didn’t fall right for me this time and I was almost going cold turkey at times on the racing front! A horrible experience! Still it meant I had a fair old chunk of racing to pick through once we made it back to NTF HQ, box-set binging style!

Now I’m back on ‘home’ turf I’m also back in the old routine and ready to crack on with the second part of the 2017/18 National Hunt season. The festive period is now long gone and all but a distant memory (thank f**k!) and I can fully and wholeheartedly focus my mind on the racing game. If there is one thing you need to make this racing game pay it’s focus. Focus, focus, FOCUS! (and not visiting family in the back-waters of North East Scotland!!)

Attentions, naturally, start to turn towards the Cheltenham Festival now although, as always, there are many fantastic days racing still to come between now and those four magical days in March. Let’s not forget that….

For this weeks post I’m going to deviate slightly from the usual ‘What we learned from the weekend’ stuff (that will be back in the groove as of next week) and look at the first week of 2018 and cherry pick five horses that have caught my eye with regards to the remainder of the season (and further afield).

The 7yo continued his love affair with the Cheltenham contours and he’s now 121131 (4/6, 2p) at the track and this win was comfortably a career best effort.

He bombed out big style on his previous start in the G2 Long Distance Hurdle at Newbury but I have a feeling that was possibly just a strange race all round and he showed his true form back on his favourite track on New Years Day.

I guess his biggest ‘problem’ come March for the Stayers Hurdle (which looks by far the most likely target) is likely to be the ground as he does seem best on ground with cut in it, albeit you certainly couldn’t say he doesn’t handle Good ground (11123 on Good ground – 2nd & 3rd came at G2 & G1 level). If there is any rain around in March then he will be a serious Stayers Hurdle player, even if the ground is riding good I can still see him getting involved.

Prior to a tilt at the Stayers Hurdle I’d expect him to be gunning for a bit of Cleeve Hurdle glory on Trials Day at the end of January.

I’ve had this lad on my radar since his bumper debut at Huntingdon (Dec 2015), waiting for the day they send him chasing, where he should really come into his own.

His win at Ayr on the 2nd was nothing more than a penalty kick and realistically he didn’t have to shift much out of second gear to get the job done in comfortable fashion.

They are taking their time with him and that could pay dividends when they go chasing with him next term. I like him a lot and he’s well worth keeping on the radar for when they go novice chasing in the 2018/19 season. He may well pick up a couple more hurdle races along the way as well and it wouldn’t surprise me if they took a dart at one of the Grade 1 novice contests at either Cheltenham or Aintree in the spring. Whether he’s up to that level as a hurdler I’m not sure but given they’ve already had a dabble with him in the Champion Bumper and the Supreme Trial at the November meeting they clearly are not scared to mix it with the big boys with this Gold Well gelding.

WE HAVE A DREAM (N Henderson)

There is a hell of a lot to like about this youngster and he just keeps delivering the goods. They didn’t blast away in this renewal of the Finale but nevertheless the way the Martaline gelding dug in and quickened away after the last was impressive.

He’s now won on Good, Good to Soft & Heavy and he’s also won from the front and from just behind the leaders. He handled the sharp Warwick track easily, the flat Doncaster track like a pro and the Chepstow undulations like an old hand, he has a serious amount going for him and looks far from one-dimensional.

His stable-mate Apples Shakira rightly heads the Triumph betting but this lad is a serious player in the juvenile division and he needs to be given maximum respect.

If he gets a solo lead in the Triumph in March he could well do some serious damage off the front end. He jumps, travels and looks like he’ll have no problem getting up the Cheltenham hill and he’s very much a player in this division.

Winning a bumper under a penalty on heavy Chepstow ground is no mean feat, to win it by upwards of 9L without breaking sweat is something else! This 5yo son of Flemensfirth looks pretty special and looks highly likely to be a serious weapon when sent hurdling and, eventually, chasing. He’s a big, robust, well put together beast and is one that very much needs to be kept firmly on the radar.

He’s by Flemensfirth out of a King’s Theatre mare, who is a sister to Voler La Vadette and a half-sister to former Bet365 Gold Cup winner Hennessy, so the breeding is very much there for him to make into a well-above average hurdler/chaser.

Before all that I’d expect the temptation of the Champion Bumper or the Aintree version to prove too much of a lure for Twiston-Davies and based on this evidence he certainly wouldn’t be out of place in either of those contests.

This 5yo is very much ‘work in progress’.

He was leading them all a merry dance in this and straightening up for two out he had them all off the bridle (to varying degrees). Unfortunately he made a complete b*llocks of that flight (not the first shoddy jump from him) and that pretty much ended his hopes of landing this valuable pot.

He’s a big robust National Hunt type who should make a chaser in time but for now he just a bit leggy and needs to fill into his frame and strengthen himself up. That will come, however, and I’d expect Nicholls to have him bang ready for a chasing career next term when he should be a much more complete horse with another summer on his back.

I like him, he’s exciting and fences and a step up in trip look sure to be the making of him.

I’ll see you all again next week when I’ll be back in the normal ‘What we learned from the weekend’ groove.