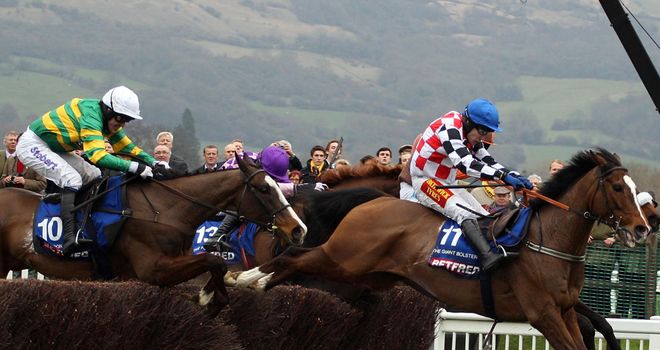 January. A time when the Giant likes to Bolster his CV.

Some perform better at the start of the season. Some peak after a couple of starts. Some are at their strongest in the spring time. Some don’t click into gear until the summer rolls around.

Some even relish running through the misery month of January! (misery month purely due to the filthy weather we generally endure! Yuck!).

It’s never easy to pinpoint exactly why a horse may show stronger form in some months rather than other months (it could be a wide variant of reasons if we are honest) but it does happen, and happen consistently, and sourcing these types of beasts is a sure way to churn out profits.

The following are a trio that have shown previous strong form during the month of January  and are well worth keeping on the radar over the next 31 days.

THE GIANT BOLSTER (D Bridgewater) 11yo

David Bridgewater’s stable star has shown precious little in the way of solid form since his close third in the 2014 Cheltenham Gold Cup. In five starts last season he never finished better than a 7L 4th in the BetBright Chase, indeed on his other starts he was either soundly thumped or just didn’t finish.

This season they’ve tried him back in handicaps, starting with a well beaten 7th in the Hennessy off OR 156 and then a disappointing 9th at Ascot off OR 149.

Off the back of that Ascot run the handicapper has again dropped his mark and the old warrior now finds himself on a very enticing mark of OR 145. 11lbs lower than the mark he ran from in the Hennessy and, perhaps more importantly, back on the same mark he last won a handicap from; the Murphy Group Chase at Cheltenham back in JANUARY 2012.

January is undoubtedly his month. Three of his five career wins have come during the first month of the year and the only time he has disappointed in his five starts in January was when they made the strange decision to switch him back to hurdles (it was off the back of an un-seat so maybe it was a confidence booster).

Even during his recent below par performances he still managed to show his liking for January with the aforementioned BetBright Chase 4th, behind Many Clouds, Smad Place and Dynaste.

The obvious plan for him would be Cheltenham trials day at the end of the month. He’s won there three times in the past and the handicap route is now a very feasible option given his current mark.

He is entered up for the rescheduled Welsh National on the 9th of January although it’s debatable whether a slog round the Chepstow mud in a large field is the ideal option for him, for all he is on a lenient mark. It’s not really a race for the older generation as since 1979 only two horses aged older than 9 have won the race and none aged 11+ have been victorious.

I can, however, see why they are tempted by the race although the percentage call is surely a pop at trials day at the end of the month.

Can the giant bolster his impressive January record now the handicapper has relented?

The Crawfords have placed this horse fantastically well, with seven wins and four seconds from his 14 starts including a G3 victory at Naas on his final start last season.

All seven of his wins have come on Soft or Heavy and that goes some way to explaining his strong January form figures, his only defeat coming when he bumped into the smart Sizing Granite (who would go onto become a G1 winner).

Jumping is this lads strong suit and whilst others struggle to jump out of the testing conditions he positively relishes the challenge, splashing through the mud and soaring over his fences for fun.

He landed a handicap in fine style last time out and the 7lb raise for that looks fair, OR 147 still looks within his compass.

He is entered in a Listed Chase at Thurles on the 4th of January and he’s well worth the step back up in grade, especially as ground conditions look sure to be in his favour.

Keep on the right side of fine in January!

The reputation of David Pipe’s improving youngster took a bit of a dent on his last start when falling three out at Cheltenham when sent off a 100/30 fav.

For me, however, that run was easily explainable; he simply doesn’t like Cheltenham all that much (form figures of 0030U at the track).

In fact he probably doesn’t like very undulating tracks all that much with form figures of 0030U13 on such tracks compared to 191111111 on easier tracks.

Prior to his Cheltenham un-seat he looked like a very progressive chaser in the making and I would be very hopeful of him getting his career back on track after that minor blip now we reach a part of the year where he has previously excelled.

Not only is he unbeaten in January (3/3) but he is actually unbeaten in the January AND February period (5/5).

The other ace up his sleeve is his liking for heavy ground (unbeaten in 5 starts on heavy) and considering we are coming off the back of one of the wettest Decembers on record there should be plenty of opportunities for them to find VLR a testing surface to splash through.

Stick with VLR to get his career back on track during January (away from Cheltenham hopefully!)

I wish all NTF readers a very Happy New Year and would like to thank each and every one of you for your support throughout 2015.

One response to “Three horses to look out for in January…”