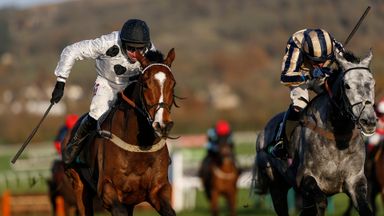 30 years ago I was standing on the terraces of Borough Briggs as a young lad cheering on the black and white of Elgin City in the Scottish Highland League.

Last Sunday I was standing in my living room in Yorkshire cheering (roaring!!) on a horse called Elgin wearing black and white silks, scaring the living hell out of my three retired greyhounds in the process!

Had you told the younger version of me what I would be doing 30 years in the future I don’t reckon I would have believed you!?!

Funny how life turns out…

Cheltenham handicaps are undoubtedly some of the hardest and most competitive races on the racing calendar, of that there is no question.

Even that, however, surely can’t excuse the abysmal record Nicky Henderson’s string have in Cheltenham Handicap Chases since the start of 2012…

To beef those stats out further…

He is currently on a losing streak of 72 (SEVENTY TWO!)

31 of the 98 runners have FAILED TO EVEN FINISH!

Almost a third failing to even complete!?

The 2nd place finish came from SUGAR BARON and I’m sure you’ll all agree he didn’t exactly run like a horse that was enjoying himself!!

The comments from the Racing Post for his run were…

‘Mid-division early, not travelling towards rear when hit 7th, plenty to do and going nowhere under pressure in last pair 3 out, headway next, strong run from last, snatched 2nd close home’

He pretty much only enjoyed the race once the jumping was out of the way!?

I genuinely have no idea why his handicap chasers run like drains at Cheltenham but with such shocking stats I guess we don’t really need to know the reason, we just need to know we should be avoiding them!!

2. Honey delivers the money at Fontwell…

Anthony Honeyball fired in a perfect three from three at Fontwell on Sunday and a quick dig into his overall stats tells me that the West Sussex track is comfortably the most prolific place for his team.

Check out his overall stats at the track since 2012…

When Honey goes the money flows!!

His last FIVE runners at the track have actually all won and this year alone he is operating at a 47% S/R at the track. Not too shabby at all…

A bit more focused and a bit tighter on the strike-rates.

Honeyball is still operating under the radar of most but he’s definitely a trainer worth keeping a close eye on, especially at Fontwell.

Follow the Honey and make some money at Fontwell…

He’s clearly a talented beast but boy does he frustrate punters.

On Saturday he was sent off the 10/11 fav in a three runner race and once again failed to deliver the goods.

He’s now started seven races at odd of 4-1 or less and has been beaten in five of those races.

That’s not good Ballyoptic son, not good at all.

What were the excuses this time around?

Does he not enjoy the Cheltenham hill? (Form of 4P2 at the track)

Was he maybe over hurdles for a season too long before going chasing?

Does he just make too many errors, like over hurdles, to be a top class performer?

He’s just turning into one of those frustrating types who just can’t be relied upon.

Could it just be he’s a big baby and doesn’t like having to lump extra weight around the track?

If/when he finds himself on a mark of lower than 150 (currently OR 154) he could be interesting for handicap chases, providing he’s carrying less than 11-6. It would be no surprise to see NTD work his magic and get him to land a decent pot at chunky odds…